Zion National Park has incredible hikes throughout the park.  One of the most popular is Angels Landing.  If you are not afraid of heights, give this one a try!

Getting to Angels Landing 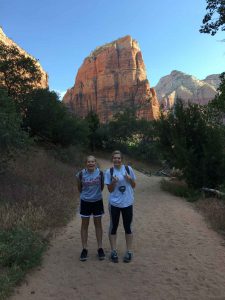 Angels Landing from the Trailhead

Take the Zion National Park Bus up Zion Canyon to the Grotto Stop.  From there, the trailhead is across the street and the river.  Before you cross the street, you pass the water station.  Fill up.  You will need it –particularly if it is a hot day.  Most people don’t take enough and regret it later on.  Once you have guaranteed that you have enough water, cross the street, the bridge and then turn right and you are on your way up the trail.

Angels Landing is a serious hike of 2 1/2 miles each way and a vertical climb of 1488 feet.  To some, this can be quite strenuous.  Others find that the more difficult part of the hike is dealing with the fear of falling as there is exposure along much of the hike and particularly the last 1/2 mile.  Nearly the entire hike is an uphill climb.  If that doesn’t scare you off, then know that most who start do finish.  From 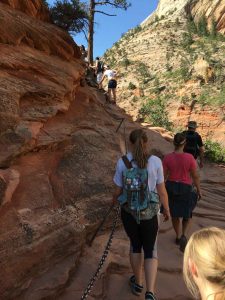 Angels Landing Can Get Quite Crowded on Holidays in the Summer

the ragged looks of some, they ache the next day for sure.  I have taken a scout troop of 12 and 13 year old boys up and they all did great.

I have hiked Angels Landing on both a national holiday (Memorial Day 2016) as well as a regular week day during the summer.  I saw both extremes on the number of people on the trail.  Holidays and weekends during the summer can be very crowded.  The last 1/2 mile can take a serious amount of time on a crowded day.  If the hike is crowded, you will have periods where you can wait 5-10 minutes for your turn over a slender section of the trail.  On the other hand on weekdays, the hike can be quite pleasant with fewer hikers.

Once you cross the bridge and turn right, you will follow the river up the canyon.  The first part is pleasant and hardly climbs.  Once you get closer 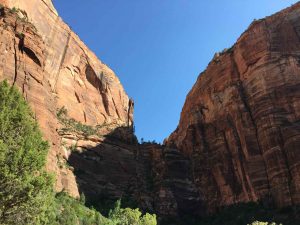 to Angels Landing, you will climb quicker.  Switchbacks will take you back and forth on a mainly paved trail up to the refrigerator canyon (the canyon between Angels Landing and the Zion Canyon wall.)  Refrigerator Canyon can be a nice shady spot for catching your breath unless the sun is directly overhead.  A nice cool breeze often runs down the canyon which can also be quite refreshing.

Refrigerator Canyon has a few windows in the wall that can be fun to explore.  At the end of refrigerator canyon you will find the Walter’s 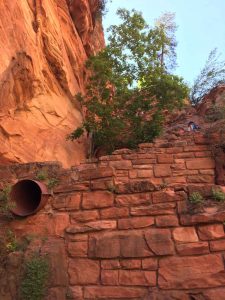 Wiggles switchbacks which climb you out of the canyon.  Walter’s wiggles are pretty steep switchbacks.  (We counted 21 switchbacks).  These switchbacks are named after the first Zion National Park superintendent.

Once you climb out of the wiggles, a short walk on the sandy trail and you will be at the Scout Lookout and the Angels Landing junction.  There are latrine restrooms at Scout Lookout!

From this point on in the hike, the hike changes significantly.  The trail becomes more of a 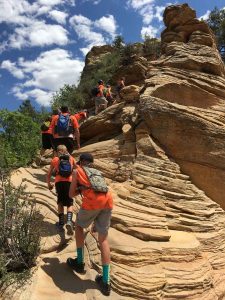 single file track with a chain that you can hold onto for support and for psychological comfort as you climb to the top.  You will often have exposure on both sides of the trail.  Just pay attention to what you are doing and hold onto any kids that you brought along and you should be fine.  The typical rule on these single file trails is that the uphill hikers have the right of way over those descending.  Most won’t be aware of that fact, just smile and make friends.  🙂

Angels Landing – The View from the Top

Once you get to the top, take in the gorgeous view in all directions!  Be careful!  And I almost forgot – be aware of the weather.  You don’t want to be up there if there is ice and snow, or if there is snow or lightning.  Choose a nicer day than that.

(Click on the photos below for a larger photo) 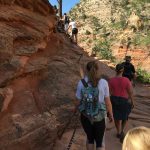 Angels Landing Can Get Quite Crowded on Holidays in the Summer 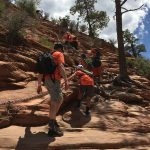 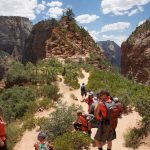 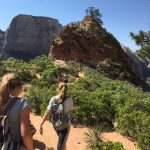 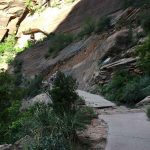 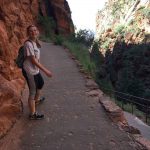 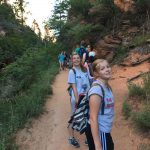 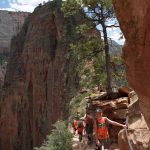 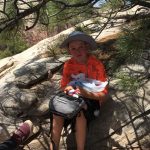 Angels Landing – A Little Shade at the Top 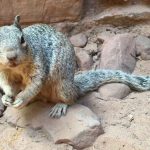 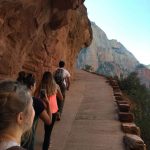 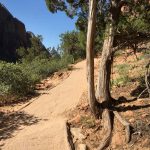 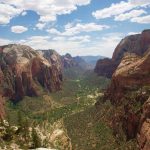 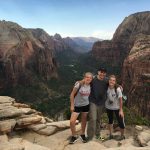 Angels Landing View From the Top 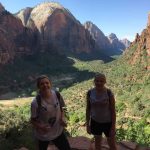 Angels Landing – Stopping for a Breather 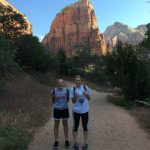 Angels Landing from the Trailhead 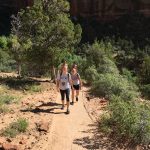 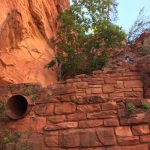 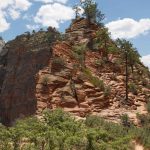 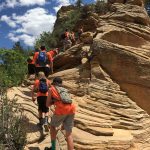 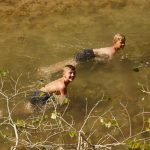