Not Every Utahn Skiis, but if they knew how easy it was to give it a try at Wasatch Mountain State Park in Midway, they would all have done it at least once.

I had never been cross country skiing before, but I had a free weekend, and I was hoping to try it out to see if my scout troop 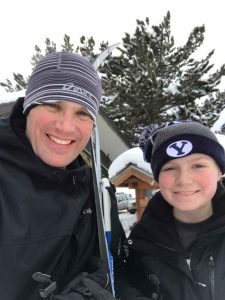 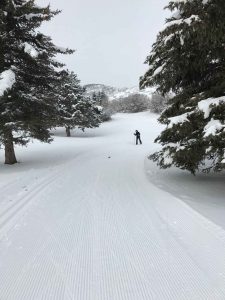 The state park is super easy to find.  Just go to downtown Midway, Utah.  Continue up the main road past the Homestead and Zermatt resorts.  A bend or two in the road and you will be at the visitor’s center of the park.  If you get lost, give them a call at:  435-654-1791 and they will give you directions.  They are open from 8-5 every day except for a few holidays each year.  We stepped inside the visitor’s center.  We paid a small fee and we were suddenly outfitted with skis, poles, and boots and were out on the trail 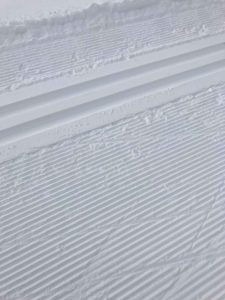 At Wasatch Mountain State Park, the trail is groomed for sprinting or for gliding in the channels. Take your pick.

We were amazed at how beautiful the groomed trails were.  They groom two trails into the track around the golf course.  First they have the sprinting groomed trail with the grooves cut into the snow so that you can push off against them with the edges of your skiis.  Second, they have the smooth grooves put into the side of the track where you slip your skiis at an easier pace around the golf course.  My daughter (14 years old) preferred the smooth grooves and I preferred the sprinting ones.

They say  at the visitor’s center that the course is exactly 5K in length which is the perfect length for trying it out the first time.  They prefer that one go counter clockwise through the trail so that there are not too many head on conflicts and crashes.  In addition to cross country skiing, the visitor’s center also rents out snow shoes if you prefer them for using on the golf course. 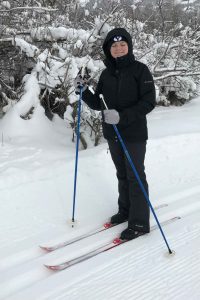 My daughter enjoyed cross country skiing so much at Wasatch Mountain State Park that I decided to bring my scouts for their next outing.  Just two weeks later, we stayed in two of the state park’s cabins during a delightful Friday overnite with gorgeous snow.  The boys were able to dig snow caves to sleep in, or for the less adventuresome, stay indoors in a heated cabin.  The bathroom facilities are nice and heated also!  Because we had rented the cabin, they gave us free ski rental until noon the next morning.

The scouts loved the opportunity to learn cross country skiing, and we were able to get a good start on our snow sports merit badge.  We will definitely be back in a couple of years to take a new batch of scouts!!

The Homestead and Zermatt Skiing

If you had a trip scheduled for the resorts in Miday (Zermatt or The Homestead) during the winter months, then you are in luck.  You are literally moments away from Wasatch Mountain State Park.  You don’t need to bring anything as you can rent it all at the visitor’s center.  Quick, easy, simple, fun!