So my roommate and I went to a BYU Outdoor Adventure Club meeting and had the inspiration to plan a trip to Moab. It went something like this, “Bryce, we should go to Moab.” “Definitely. When?” “Next weekend.” And the planning begin! It was up in the air if we would go because we were waiting for Bryce’s brother to respond if we could use his car or not. Sometime around Thursday he finally let us know that the car was a go. And thus the adventure began.

Friday night, after we got out of class, we packed all our stuff in the Ford Escape, put my bike in the back and headed up to Sandy. There we picked up my brother’s bike for Bryce to use and a bike rack. Then came the 4 hour drive to Moab. We left Sandy at about 7pm and arrived at our camp site at 11pm. We found a great free place to camp on Willow Springs Road, about ten miles north of Moab off Highway 191, found using the site freecampsites.net. The GPS coordinates are 38.696832, -109.6981 if you want to look it up. It is a dirt BLM road with campsites off the side. Well kinda campsites. More of areas just to pull off the road. There is no running water nor bathrooms, so bring water with you and bring paper with you. Like I said we arrived at 11pm and set up camp. We both set up our hammocks on the car rack and trees, made dinner and went to bed.

Lets just say that it got quite a bit colder than we thought it would. It got below 30 degrees and we didn’t really prepare for that. The biggest problem for me was the hammock. When I am cold I sleep on my stomach. I don’t know if you have ever tried to sleep on your stomach in a hammock, but lets just say that it does not work. At all. I don’t even know how to describe how difficult it is. Just imagine laying on your stomach but in a V so your hips are lower than your head and feet. It might be some intense yoga pose, but not a good sleeping position. So after an unknown amount of time, I woke up, grabbed a tarp and a pad and just slept on the ground. After I did that I was fine, and wasn’t cold anymore either. However, Bryce didn’t sleep well because he was cold. Texas Baby. So tip, don’t sleep in a hammock if you think it will be cold.

I woke up to the sound of Bryce moving some of our firewood around at 6am. 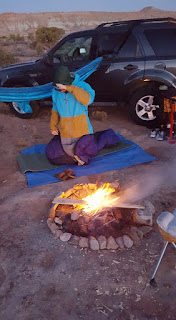 We got up and sat by the fire until the sun was all the way up. Made some oatmeal for breakfast and cleaned up camp.

We finally left our campsite at about 8am and headed into town to buy a couple spare tubes. We found out that there are no bikes shops that open before 9am in Moab. That doesn’t make any sense to me. But it gave us some time to go to the bathroom at a gas station and find out where Burger King was. Always important to know. About this time we found out that Bryce’s brother had left Taylor Swift’s 1989 CD in the stereo of the car and things greatly improved. Picked up some tubes and headed out to the trail head.
We had debated about a couple different locations in our preparations but finally decided on the Klondike Bluffs area. An area about 15 miles north of Moab off Highway 191 again. We found out that there are campsite at the trail head there for free, so we could have camped there. Well, now we know. We showed up and it was about 45 degrees outside, so warming up. We changed and get everything ready.
Here I will take a minute to talk about the bikes we were riding. I was riding my baby Carolina (pronounced like Car-o-leen-a)(Yes my bike has a name, all my bikes have names. My road bike is called Abby in case you were wondering). She is a Raleigh Tokul 2 2014 model. She’s a 27.5 hardtail and I love her. She’s the first mountain bike I’ve owned and I think that she is a great starter hardtail. She has a Sr Suntour XCR 32 120mm front fork so still a fair amount of suspension. 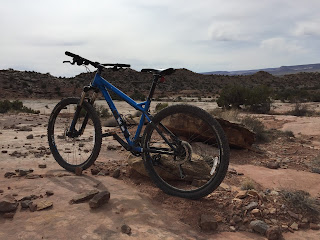 Ok, I know that she isn’t that great of a bike, but I love her with all my heart. Bryce was riding my brother’s Specialized Hardrock 2012. It’s a decent bike. I can’t name off all the facts about it because I I don’t love it as much as I do Carolina.

We went the south trail head and took Jurassic Trail north. It is relatively flat and mostly on dirt and sand. It is considered the easy trail. We then caught up with the Jasper West and then the off roading trail (The dotted line on the map). Every trail intersection has a sign and many times a map. It’s pretty top. We made it to the parking lot until we caught up with the Mega Steps trail. 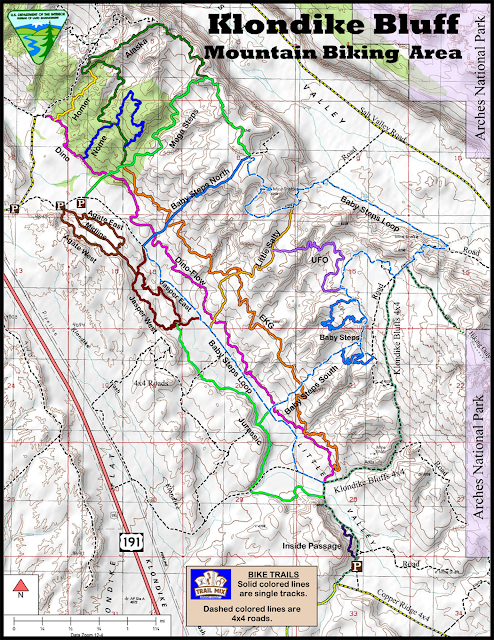 Our goal was Mega Step. Mostly because the name sounds good. It turned to be considered one of the slightly harder trails. It was considered to average a 7% grade. Not to crazy but yet a lot of fun. Right from the start on the tail we started on slick rock. AHHHH YEAHHH!! MOAB! It was pretty dang steep but yet awesome. On this ride I learned to love slick rock. As the climb progressed I got better and better and riding up the big ole rocks. We weren’t moving super fast either. After a climb of about 800 vertical feet we got up to the top of the ridge. Thats where we took these pictures. As this point it got up to 60 degrees. 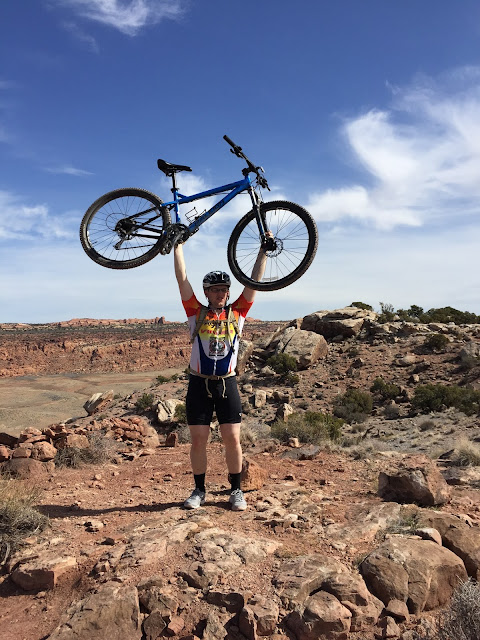 From there the climbing pretty much topped. We rode along to top of the ridge until the end of the Mega Steps. From there we picked up the Baby Steps trail going downhill. Here it would’ve been nice to have a full suspension. From here, Bryce’s arms and hands started to hurt, a lot. He told me on the Monday afterwards they were still hurting. We picked it up and it was a quite a bit of fun. We turned south on Dino Flow back to the southern trailhead. All together we went 15 miles in about 3 hours. We were stopping a fair amount to see the sights so it wasn’t to fast. And we rode on slick rock! 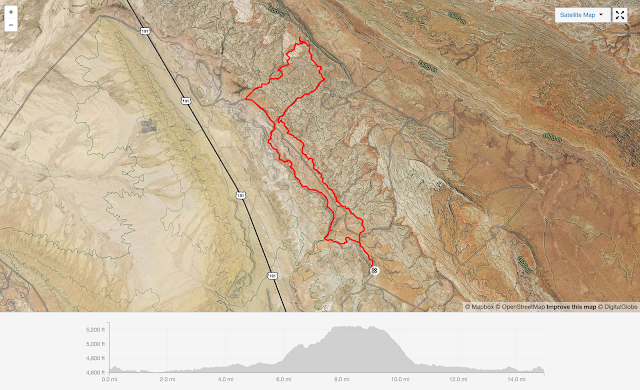 After that the earlier located Burger King came in handy as we stuffed our faces and went back home.

So in review
Fun? AHHHH YEAH!
Death Defying? Not really. Unless you are super fat, then you’ll probably have a heart attack on the climbing.
Date worthy? She better be pretty serious and has to like camping. But as always, if she doesn’t like the outdoors, you better move on.
$- Only for gas and food.

Do it. Just do it. Moab is awesome.

I must go, the mountains are calling.

BYU student looking for adventure. Hiking, camping, fishing, mountain biking and everything in between. All on a college student's budget